This summer, 104  members of the UM class of 2020 are entering medical school during a historic time, a global pandemic of COVID-19. Because of safety protocols, they’re missing out on milestone events, like the traditional white coat ceremony, when a white coat is placed on new medical students’ shoulders, and they recite the Hippocratic Oath, signifying their entrance into the medical profession. Yet, their education moves onward. Through all the intensity that the first weeks of medical school brings, these fledgling medical students are aware that they now have a front seat to the challenges and advances in health care that are front page news. Here are the journeys of three.
Connor Bluntson (BS Biological Science ’20) 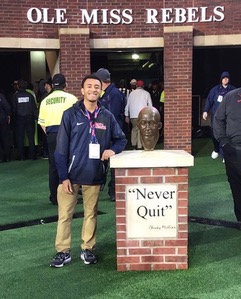 Connor Bluntson’s emergence into medical school has been a quick plunge.

“First two tests yesterday [August 19] and I pretty much collapsed into bed as soon as I got home!” he said.

“Starting medical school during a pandemic has been quite the unique experience. The format of many of our classes is changing or going virtual, it has made an already difficult year of transition even more challenging.”

His  first experience at University of Mississippi Medical Center came after his freshman year at UM, when he researched the effects of sleep deprivation on early life development, shadowing Dr. James Shaffery, Director of the Animal Behavior Core Facility in the Medical Center’s Division of Neurobiology and Behavioral Research, a part of the Department of Psychiatry and Human Behavior.

As a premedical student and major in the Department of Biology, he found guidance for his passage through academia w MAPS (Minority Association of Pre-Medical Students).  Based out of the Health Professions Advising Office, MAPS is a nationally recognized organization open to all undergraduate minority students who are headed for a career as a health professional.

In the summer of his junior year, MAPS opened the door to a six-week long summer health professions preparation program at the College of Physicians and Surgeons, the medical school of Columbia University.

Perhaps most important of all, it was through MAPS that Bluntson met his mentor, Khalid Manzoul (BS 18), now a third-year medical student the University of Mississippi School of  Medicine. Two years ahead of Bluntson, the two first met at Ridgeland High School and were reunited through MAPS.

“It’s a different journey to be a premed as a minority person,” said Bluntson. “MAPS would bring in minority doctors to talk to us so we would have role models. MAPS students take other students of color under their wing and support them.”

Recalling UM’s introductory science courses, he said, “It really helps when you walk into a large lecture hall and see other minority students there. We would study together and support each other.”

Manzoul, was invaluable when Bluntson was studying for the Medical College Admission Test (MCAT) last summer.

“I dedicated a good month and a half to study,” he said. “Khalid passed down his MCAT prep books to me. I knew these books had worked for him, so they should work for me, too, in scoring high on a very difficult test.”

The magic worked. Bluntson’s first year at UMMC will a build a foundation that balances academics and clinical work.  His first-year courses include: Biochemistry, Histology and Cell Biology, Gross Anatomy, Physiology, Developmental Anatomy, and Neurobiology.

During his second semester, he will ease into patient care with Core Concepts, a course that  is a gradual introduction to the clinical aspect of medicine, and includes a basic life support class, guest lecturers, group projects, and the medical students’ first patient interaction.

“I feel fortunate to begin my medical journey now in a time where healthcare professionals have never been more crucial to the framework of our society,” he said. “It helps to put my studies in perspective knowing that I’ll soon be able to make a similar impact in my own community, and hopefully, help to prevent a similar disaster from occurring in the future.” 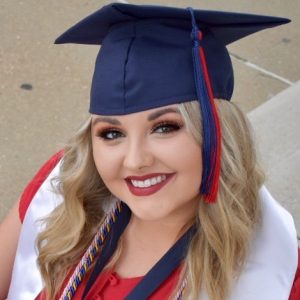 Joey Davis and Bluntson are in the same cohort. On her first day of orientation at the School of Medicine at the University of Mississippi Medical Center (UMMC), Joey Davis (BS20) recalled the first phone call she made after she learned that she’d been accepted into medical school.

“I called Dr. Taylor and Ms. Kelli,” she said.  “Dr. Taylor put me on speakerphone so that I could tell them both at the same time.”

“I started out in the School of Pharmacy, but it wasn’t really the right match, so I went to speak to Ms. Kelli, and she helped me get an internship shadowing doctors in the emergency room at St. Francis Hospital in Memphis. That’s when I knew I wanted to be a physician.”

At St. Francis, Davis started out shadowing physicians the summer of her freshman year.

By April of her sophomore year, she was hired to a full-time position as a scribe for the ER doctors.

“A scribe takes notes for the doctors when they’re examining the ER patients,” Davis said.

While she worked at St. Francis, she also maintained a full course load at UM and—in her free time—worked in the UM Department of Chemistry as a group study leader.

Her most memorable moments at her scribe job were seeing how some patients put the doctors trying to help them “under scrutiny for their ethnicity, race, and gender.”

“I saw female doctors who didn’t get respect and African American doctors whose patients wouldn’t let the doctors touch them, but the doctors always handled the situation with complete professionalism,” Davis said. “I saw how they always maintained respect for the patients.”

Davis said that Taylor and Hutchens helped her articulate these experiences in essays she wrote for her medical school applications. They also supported her application process by helping her get a scholarship to pay for online tutoring for the notoriously difficult Medical College Admission Test (MCAT).

Taylor had created a scholarship program with funding from large test preparation companies, like Kaplan and Altius, in order to ensure that the steep price wasn’t an obstacle to students’ excelling on the test.

“It was about $3 thousand worth of materials, including the practice test books and online practice sets,” Davis said.  “I’m the first generation in my family to attend college, and that would have been unaffordable for me.”

“I was always there anyway, so working there wasn’t much different,” she said.

She chose UMMC for its small size.  As she begins her education there during the pandemic, she feels that the unusual circumstances add “another layer of meaning. We’re going to be obtaining knowledge as we go, just like the rest of the medical world,” she said. “It’s clear that I’m passionate about being a physician.” 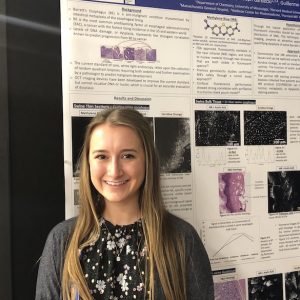 Mallory Loe found her inspiration to become a doctor under her own roof growing up.  Her little sister was born with a congenital heart defect just eight days after Hurricane Katrina and had to be airlifted from the family’s local hospital in West Monroe, Louisiana, to a hospital in New Orleans with the ability to perform cardiac surgery on newly-born babies.

Years later, that initial fascination with medicine led Mallory to the HST-Wellman Summer Institute for Biomedical Optics, a collaboration between Harvard University and the Massachusetts Institute of Technology.  Each summer, the Institute chooses eight to twelve undergraduate students from across the country to pursue full-time laboratory research for 10 weeks.

The fellowship funded Mallory’s summer research at a lab in Massachusetts General Hospital, run by Professor Guillarmo (Gary) Tearney, the Remondi Family Endowed MGH Research Institute Chair, Professor of Pathology at Harvard Medical School, and an Affiliated Faculty member of the Harvard-MIT Division of Health Sciences and Technology (HST).  At the lab, Mallory was part of a research team that leads the medical field in using high-resolution optical imaging modalities to diagnose disease rather than taking tissue from the body for biopsies.  Doctors can get a good visual on a part of the body and do a diagnosis without an invasive procedure.

She found the fellowship with Tearney after meeting him in during her Junior Quest, a program originating in the Sally McConnell Barksdale Honors College. In December 2018 , several SMBHC juniors traveled to Boston to interview professionals in their fields of interest and to gather information for their honors theses. During the trip, Loe visited Tearney, whom she had researched and contacted for an appointment.  Atter they met, he suggested that she apply for the HST-Wellman Summer Institute.

“I love research and discussion about medical topics, and I was interested in doing research that could have a direct benefit to so many patients,” Loe said.  “It was an incredible opportunity.”

Loe will continue her journey at the Tulane University School of Medicine, which she entered this summer.