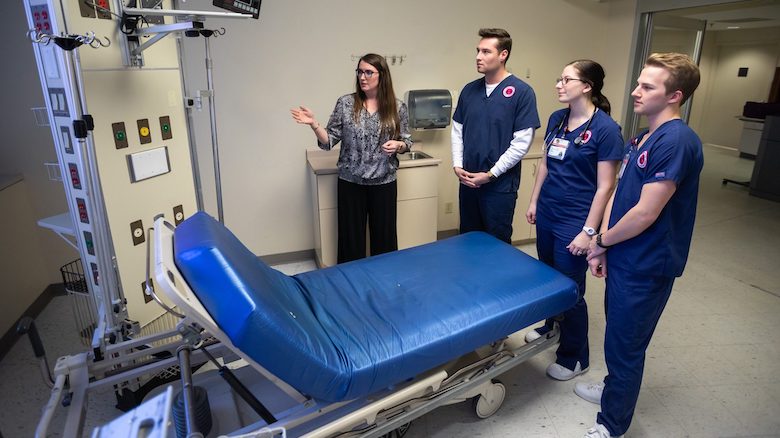 Beginning in the fall, the University of Mississippi School of Nursing will expand its footprint in Oxford with a new space and more students.

The next cohort of students pursuing the Accelerated Bachelor of Science in Nursing degree will number 45, an increase from this year’s class of 30. The eventual goal is to admit 60 students each year, according to Mary Stewart, the school’s interim dean.

And students will be doing their work in a new space: the South Oxford Center, which housed the old Baptist Memorial Hospital-North Mississippi before being purchased by the university in 2017.

The hospital’s former intensive care unit will be converted to a high-fidelity simulation practice lab for nursing students.

“With 12 bays, faculty will be able to run several scenarios simultaneously,” Stewart said. “In the end, space matters. Having this dedicated area for the School of Nursing will enrich the educational experiences for students.”

The decision to grow the program was based on the demand from both applicants and the workforce. In addition, students pursuing their accelerated nursing degree undergo a more intense schedule and need different resources and spaces than a traditional undergraduate student requires.

“The A-BSN requires intensive study for 12 months,” Stewart said. “Students do not work outside school, so they spend much of their time in classes, labs, clinicals and other program-related activities. They need space for all of these things.

“Additionally, students need dedicated areas to study, work on projects and sometimes simply retreat for some solitude. The new space affords all of these opportunities and more.”

The Oxford nursing program is housed on two floors in Kinard Hall. The new space in the South Oxford Center will include an administrative suite for faculty and other offices, a 60-student classroom with full technological abilities, student lounges and other common areas.

Eva Tatum, assistant professor of nursing on the Oxford campus, has overseen much of the planning for the expansion.

“We can’t grow (without more space),” Tatum explained. “There’s all this talk of nursing shortages, and our accelerated students really are highly desired as nursing graduates by employers.”

The School of Nursing began offering the accelerated nursing program in Jackson in 2006, and UMMC is the only institution in the state to offer an accelerated nursing degree for students who already have one degree. The program has been offered in Oxford since 2014.

The Accelerated BSN program is designed for those who have a bachelor’s degree in another field and wish to change career paths quickly. It contains a continuous three-semester curriculum in which students participate in clinical training and classroom instruction.

The goal on the Oxford campus is to collaborate with the Health Professions Advising Office to promote the program and develop pipelines for current Ole Miss students, especially in programs such as nutrition and biology, to easily move into this degree, Stewart said.

This story was prepared by the UMMC Office of Public Affairs.